Run as fast as lightning... 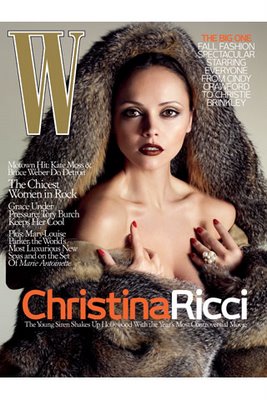 Run, now, don't walk, don't take one more bite... the new W magazine is out and it is THICK and still only $5 in the US: CHRISTINA RICCI has a big article in it with frameable photos... I may have to buy a second copy to take apart the pages and frame some in a gorgeous collage. She's the best version of a flapper girl that's come around in several years. The whole issue is great, showing off the new dark, mod fashions for Fall and Winter 2007.

One of the things she says in the article is that she's not allowed to buy any more fur... hmm, I hope that means not keeping any of it and wearing it because this cover is the only part of this issue that disappoints me. People have to stop promoting fur and leather as glamorous.

They've also got to do something about allowing Naomi into a photo shoot wearing a bikini without getting waxed first...(pg. 515). At least there are solutions to the unsightly other fur. Of course, maybe no one will dare to get near her after she's assaulted all of her help.

Osment did NOT see the mailbox 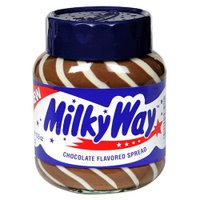 Here we go, Haley Joel Osment hit a mailbox and now everyone will be joking that he can see dead people but he cannot see a mailbox. I bet it will end up on one of those More of Best Celebrity Ooops! (an extra "o" for extra oops) on VH1 or E!. The DUI and possession charges are not going to sit right with all of those insurance companies that have to insure his future film productions. We can see he's already better at the whole "being arrested" process than some of his other peers in the movie world. However he probably should be ashamed that he was caught driving a '95 Saturn. I have not found a mugshot of him. I can't imagine that he had as good a time as Joshua Jackson had in his photo moment.

Of course, Wednesday hopes he can recover from his injuries in time to film a remake of "The Late Great Me! Story of a Teenage Alcoholic" which was an award-winning After School special back in 1979. This should be a part of his community service (as opposed to jail). The story should be updated to include use of cell phones, the Internet, MySpace, laser pointers, cars with DVD players, and updated snacks! Life was sure less exciting when people got wasted in '79, huh?

The Gathering coming to DVD

The Film Asylum reports that The Gathering will be on DVD on October 3rd. It was never released into theatres in the US maybe because it looks more like a longer version of an "Outer Limits" episode. The release date is well-timed with the writer Anthony Horowitz's latest movie release, Stormbreaker, due in the US on October 6.