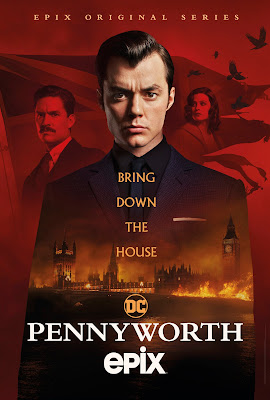 If you have not watched all of season 2 of "Pennyworth" on EPIX, please consider this a warning that there will be spoilers ahead. This post will explore the use of artwork to foretell the end of season 2 and includes an analysis of the character Capt. Gulliver "Gully" Troy.
EPIX's season 2 episode 5 "The Bleeding Heart," involves a scene at the home of Capt. Gulliver "Gully" Troy (James Purefoy). He expounds on how he "commanded a thousand men in battle...sat with kings" while in the same shot is a print of a famous painting directly to his left, "The Relief of the Light Brigade, 25th October 1854," by Richard Caton Woodville (1856-1927). [View a larger version here.] Intriguingly appropriate that this is the only piece of art symbolically on display next to where he leads a meeting about the job that the team will undertake in the same episode.
The artist captured the moment the British and the Russians brutally clashed during the famous battle of the Crimean War. The British cavalry, under the command of the Earl of Lucan and Lord Fitzroy Somerset Raglan, heroically charged towards the Russians who were shooting their rifles and muskets at them. It's an image depicting the soldiers ferociously charging on their horses with swords in hand into the vast landscape towards the Russian troops who inevitably slaughter the cavalry.
The appearance of Woodville's painting in "Pennyworth" hints at what is to come during the epic finale of season 2. Episode 10, "The Lion and the Lamb," provides us an exciting final four minutes in which we watch Alfred "Alfie" Pennyworth (Jack Bannon) in command of his team of soldiers supporting The English League, aka the good guys, leading their charge towards the Raven Union soldiers while shouting, "Forward!" Indeed, The League's "light brigade" possesses the same immense rage and courage as the British troops of the 19th century. It's one of the most heroic endings to a season with a super-charged weapon, that being Capt. Gulliver Troy using himself as an unstoppable, stormcloud weapon.
In addition to the Woodville painting, consider the text of the poem about the same battle. If you were one of the lucky students in grade school to be asked to read a verse from Alfred Lord Tennyson's poem, The Charge of the Light Brigade, it was apparent that the writer was proud of the British cavalry's act of sacrifice during this battle in the Crimean War. Here is the first stanza:

See more about the painting and the poem in this scholarly article, "The charge of the light brigade and the Crimean War" by Alastair W. Massie here.
Capt. Gully Troy is a lifelong, fearless, decorated, and dedicated soldier at heart. He openly admires fellow brave soldiers who served alongside him and who continue to work with him under his leadership. For example: 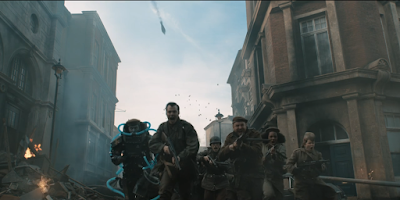 Read EPIX's press release about the new series regulars who appear in season 2. Fans are definitely watching for any news in the coming months about if we're going to get a third season of "Pennyworth." This blog will post any updates if such news is announced. In recent news, HBO Max is looking at having "Pennyworth" on its network, especially if a third season is picked up.
Finally, as a side note, we should think about if Capt. Gulliver Troy was created with a wink to the writer and director John Milius. He wrote Apocalypse Now, and furthermore, created the character Col. Kilgore, played by Robert Duvall, who possesses similar traits as Capt. Gully Troy. Milius created and was executive producer of HBO's "Rome" series before HBO hired Bruno Heller (Pennyworth's exec. producer, developer & writer) to be the executive producer. It is no surprise that Heller would have James Purefoy play Gully with knowing he was perfect in the role of Mark Antony. Would Heller have been thinking about Col. Kilgore's eccentric side, even just a little bit, in creating this new character? Certainly, this blog writer easily imagines Col. Kilgore and Capt. Troy sharing a bottle of Scotch while they exchange tales, say, in Cuba in the 1950s; Hemingway laughing with them at the table, too. Although not part of the DC Universe, I recommend to those who want to know more about John Milius to queue up the documentary about him here.
Posted by Wednesday's Korner at 9:34:00 PM