The remake of "Dark Shadows" is going to be a Tim Burton and Seth Grahame-Smith collaboration. Smith wrote Pride and Prejudice and Zombies so it is apropos that he's into the gothic macabre end of literature. Johnny Depp as the vampire Barnabas Collins with Tim Burton directing should make the movie tantalizingly dark emphasizing on the dramatic closeups.

The original "Dark Shadows" soap opera ran on ABC for 30 min. a day from 1966-1971. Stories of people running home from school to catch it have been told to me over and over. It was syndicated later on the SciFi Channel where new fans found it addictive. All the episodes are now available in DVD box sets for all to enjoy. There isn't a storyline of the series that I didn't like where Barnabas was in love with Victoria Winters or Josette Collins, or when Angelique bewitched Barnabas and Quentin Collins.

Perhaps most underrated is the original music composer Bob Cobert. His suspenseful episodic music moments and the opening theme are timeless. Would a movie remake of "Dark Shadows" use different music? It just would be unthinkable; box office suicide.

The Dark Shadows Boards are where you can find a lot of updates on festivals and movie tidbits.

honey bee in the cold of San Francisco

I am troubled tonight at this early evening hour where it is 56 degrees F and there is a honey bee outside my kitchen window, lost and lonely. I see pollen on one of its legs. It is impossible to find its way back to the hive tonight. Do I take it in? I run the risk of getting stung if I do. Its antennas were moving when I first spotted it, but now I see the antennas are cast down and its nose is right against the wood. The antennas went from fluttering to a very light, microscopic twitch. I think it could either be dead or just sleeping. Is there any way to tell the difference between a bee sleeping or having died and not flipped onto its back? Tapping on the window does so little for it. Here is a photo of it. 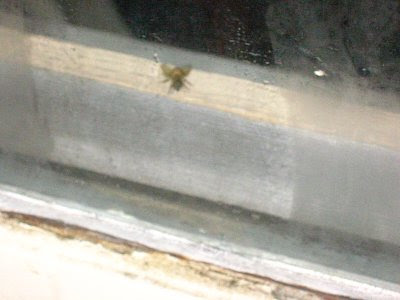 I opened the window and it started moving so I know it is still alive, but I don't dare let it in and it can sting me or my cat.
UPDATE: The bee was still sleeping there at 8:30AM, but once the sun burned through the clouds, the little fella must have warmed up enough to fly back to its hive. It was nice seeing you, bee.
Posted by Wednesday's Korner at 7:45:00 PM

Anagram of the Dead