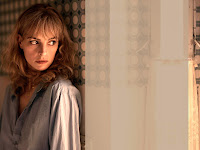 Jerichow is one of my favorite films from the 2009 Berlin & Beyond Film Festival. Read the review of the film I added to Netflix. It is German language, subtitled in English.


Lead actor Benno Furmann has also starred in The Princess and the Warrior and in the film Joyeux Noel.

Unearthed graphic video (you've been warned) of the pyrotechnics injuring the 25-year old Michael Jackson while shooting a Pepsi commercial.


I have a theory as to why Jackson must have not felt the burning flames until the stage crew started to put it out: the alcohol in the hair product he used burned off initially before the flames scorched his scalp and face. The look on his face as he is picked up off the floor and escorted out is of shock from the pain. But I think he smelled the burning by the time he hits the main stage where he begins singing because he begins to take off his jacket, which he didn't do in the first take. He may have thought his clothes caught fire. It is quite obvious that safety precautions were not taken such as wearing non-flammable products and having a Michael Jackson stunt double first rehearse it several times to test the timing of the pyrotechnics before using pyrotechnics with the real Michael Jackson. The recovery from 2nd and 3rd degree burns is not always smooth; a risk of infection is always possible and the scarring can still cause pain to the touch while it is healing. The unfortunate fact is that he may never had become addicted to pain killers if this preventable accident had not occurred.

Enki Bilal - Animal'z on exhibit and up for auction in France

Here is a Google translated interview with graphic artist, writer and filmmaker Enki Bilal by Alexandre Phalippou of the La Tribune where Bilal explains why he "will be exhibiting at Artcurial the 350 cases of [his] latest BD, Animal'z from 8 July to 10 September. They will then be auctioned on 19 September."