Craving The Wine Show - a Gateway to Delicious, Luscious Escapism 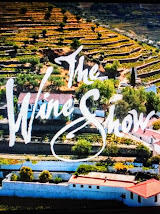 Hello, my name is Wednesday and I'm a TV streaming junkie. I've been addicted to "The Wine Show" for nearly half of this year. I blame the TV series, "A Discovery of Witches" for being the gateway into three seasons of "The Wine Show." When each episode of ADOW ended, I dived into the next one, enabled by auto-play; eight episodes flew by. Unquenched, and needing to fill the void, I searched YouTube with frantic despair for something equally potent. My initiation into "The Wine Show" began with the "The Wine Show At Home" episode, "A Discovery of Witches Wine Tasting." Wine expert Joe Fattorini highlighted three bottles from the wine cellar (a list created by the ADOW author, Deborah Harkness) for the character, Matthew Clairmont. One of my favorite wines, Au Bon Climat Pinot Noir from Santa Barbara, was among the three discussed; a kismet moment.

Assessing that the two seasons covering Italy and France on Hulu consist of 19 episodes, I struggled to ration to two a day, upping eventually to three a day. Done. Repeated viewings, from beginning to end, and then randomly choosing one episode during any meal of the day. Cravings were endless.

A new "Wine Show At Home" episode with Joe and Dominic West announced a new season to be available at the end of October, but not on a U.S. platform. My fixation was unstoppable. When your back is to the wall, you find a workaround. Plunging into a new season was an unsustainable rush, so again, with auto-play enabled, I binged the entire S3 in a day.

In an effort to de-mystify why "The Wine Show" is instantly addictive, it comes down to the rapport between wine experts and the presenters. Mix in wit, historical facts, and a sense of adventure and you get infectious chemistry unmatched by any average docu-style TV. No matter if inexperienced with wine or well-versed in the subject, the episodes are welcoming and soothing to the senses. We're living in a time in which we must practice self-care. Addiction has such a bad connotation -- one has to weigh whether your obsession leads to long-term damage or innocent enjoyment. I'd say more the latter with the fact that, presently, visiting foreign lands is forbidden, and we cannot gather closely in tourist meccas. Safely on the sofa, I chill out and Hulu.

The segments are uniquely approachable and relatable; not snobby or aristocratic. Presenters Matthew Goode aka Goodey, James Purefoy, Matthew Rhys aka Rhysy, and Dominic West take us along with them to learn about wine, see the sights and interact with the winemakers. The guys have a laugh, usually at Joe's expense, but he takes it like a good sport. I cherish the privilege of watching the end credits which have 30 golden seconds of "we didn't plan that" following each episode. Laughter, indeed, is the best medicine.

Breathtaking scenes appeal to lovers of green landscapes, neoclassical architecture, gourmet food, which pairs well with the fascinating history of viticulture and getting to know winemaking families. Presenters travel by foot, car, or boat in their quest to find the best bottles to bring back. Joe assigns their challenge with the goal to showcase a representation of the best wine. In addition, Joe visits different countries to find wines for the presenters to taste, and they discuss its origins, how its made, and its historical significance.

In a wine industry dominated by men, it is refreshing to see expert/co-host Amelia Singer for all three seasons in solo segments and sometimes with Joe exploring some off-the-beaten-path regions plus well-known old world wine regions.

Head brewmaster Jaega Wise of Wild Card Brewery in the UK, whom we first meet in season two, returns in S3. She helps Joe pair beer with Thai cuisine.

I take notes and look up the information whenever I think I'll be purchasing wine. Whatever I learn in these episodes, often directly from the winemakers, I find useful for when I visit my neighborhood liquor store.

Explore these sites for more information:

From this point forward, I've included some screenshots of segments of the third season without revealing the bottles of wine. You'll be spoiled by the photos of the adventures, but not see what they drank, to maintain suspense. So if you haven't watched the show, this is your chance to bounce in case you prefer to wait to see it when it is available in the U.S.
Naturally, the last episode of each season comprises of recaps. The S3 finale expands on the preceding episodes using fresh footage. Ep. 4's recap reminds us that Goodey and James were put to the test in front of the Confraria Gastronómica do Bacalhau, (English translation: Gastronomic Brotherhood of Cod).
This is an undeservedly, cruel set-up for the presenters. They make lunch and it is judged by the Confraria. A recitation in Portuguese during the induction ceremony; the easy part. Next, Goodey and James are served a mouthful of salted, dried cod. Don't let anyone fool you with calling it the "prosciutto of the sea." As much as I can completely commiserate, in my opinion, this is the funniest segment of S3. Goodey bravely obliges -- politely eating and masking his disgust -- hastily ingesting the wine provided for the ceremony to cover up the taste. Indeed, one Confraria member is laughing in the photo; not the first time seeing this reaction.
Thankfully, no one lost an eye.