Video of Sam the Koala drinking from a water bottle, found by a fireman

Help is needed and you can donate to the Bush Wildfire Appeal. Almost a million animals have perished but more are starving and showing up on the doorsteps as they are docile creatures, unafraid of humans. People are bringing them to the animal sanctuaries and the shelters need donations to keep them safe and healthy until they can be released back into the wild. Sacrifice your week's worth of cappuccinos, burritos, pizzas, takeout or snack foods and use the money to donate and save the wild animals.

The currency exchange from US to Australia dollars favors the US dollar. You can use a credit card to make a tax deductible donation online. 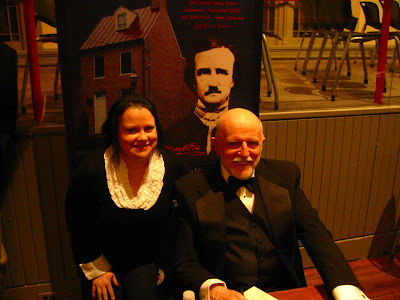 The first act was a comedic play by John Spitzer of Fraudulent Productions, "Some Words With A Mummy," adapted from Poe's short story and it was particularly fascinating to learn about the Scarabaeus tribe, where Poe's short story describes "...all the Scarabaei embalmed accidentally while alive, are alive now. Even some of those purposely so embalmed, may have been overlooked by their executors, and still remain in the tomb."

The highlight was seeing John Astin on stage performing the poems of Poe and offering his eloquent perspective on Poe's writings, particularly surrounding the demons that haunted Poe throughout his life. Works we heard were "Alone," "The Conqueror Worm," "The Masque of the Red Death," "To Helen," "Annabel Lee," "The Raven," "Eureka," as well as others. Astin's stage presence was breathtaking and energized by the content of the poems. His sensitivity to the verse and meanings behind the words was profound. I hung on every word of "The Raven" as Astin added understated hand gestures, drawing us deeper into the story: "Then, methought, the air grew denser, perfumed from an unseen censer Swung by seraphim whose footfalls tinkled on the tufted floor."

He closed with the mentioning of Poe's "Eureka" and explaining that the book Darkness at Night: A Riddle of the Universe devotes chapter 13 to Poe ("The Golden Walls of Edgar Allan Poe") because of "Eureka". Astin paraphrases some of Eureka -- the part in its entirety here: "If I venture to displace, by even the billionth part of an inch, the microscopical speck of dust which lies now upon the point of my finger, what is the character of that act upon which I have adventured? I have done a deed which shakes the Moon in her path, which causes the Sun to be no longer the Sun, and which alters forever the destiny of the multitudinous myriads of stars that roll and glow in the majestic presence of their Creator." Astin goes on to state that the author of Darkness at Night found Poe's words to be quite ahead of Einstein's time and his theories.

When the show concluded, John Astin sat and met the members in the audience, including myself pictured with him above.

I have to commend the organizers of the events for doing a wonderful job of paying tribute to Edgar Allan Poe. The ability to purchase the Poe postage stamps and other memorabilia made it quite convenient for Poe fans to enjoy the author and be in the company of other fans. The Poe Historical Society members were all dressed in period costume and the raffle at the end of the night included as a prize a cake with Poe's image. You can read more about what took place at the events on their blog.