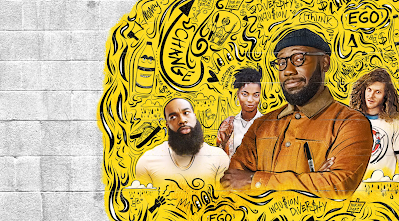 On April 4, The Cartoon Art Museum of San Francisco welcomed back live events with an evening about the Hulu Original TV show called “Woke”. The museum is currently holding a terrific retrospective titled, “Keith Knight’s WOKE in San Francisco,” consisting of Keith Knight’s comix as well as the props from “Woke.” Located on 781 Beach Street, the museum is a welcome place of refuge in the most concentrated tourist district known as Fisherman's Wharf.
Knight’s Patreon members and friends lined up early to check out the exhibit and watch the San Francisco premiere of “Woke,” episode one of the second season, “A Knight in the Park.” It is described as, “After a year of rising as a prominent activist, Keef draws a strip that sparks a protest headlined by him. But can he live up to his new platform?”
We were all so thrilled to welcome back Keith Knight to San Francisco, especially at the Cartoon Art Museum where he had spent time as a volunteer; to congratulate him in person on his show's success, and to share laughs with each other as we all enjoyed the new episode.
“Woke” is a television series based on the life of cartoonist Keith Knight during the time he was a struggling cartoonist on the verge of transforming his work into messages of activism. In the 1990s, he began holding presentations of his work. Bookstores, libraries, galleries and museums were some of the venues in which he used his comix to highlight the political and social issues occurring among the communities of color. He drew and wrote about voting rights, gentrification, police profiling, police brutality, and more. His presentations were never preachy and the same goes for his TV series “Woke.”
The writing in the series "Woke" comically addresses the painful cost-of-living, plus the gentrification problems, police profiling and police brutality while offering insightful viewpoints. The Bay Area cities, which Keith Knight knows well--San Francisco, Oakland, and San Jose--for the last two decades have been losing talented artists, teachers, writers, non-profit organizations, and the list goes on. Working three jobs to raise a family sadly is inhuman. Tens of thousands have moved to the far edges of the Bay Area just to afford rent. In "Woke" we watch Keef, Ayana, Clovis, and Gunther have to grow and adapt to the changes; learn to become resourceful.

In “Woke,” Lamorne Morris (Winston from "New Girl") brings such a natural performance in portraying Knight's personality. He does so without mimicking or impersonating him. It is a testament to the hard work put in by showrunners Keith Knight as co-creator and the executive producer along with Marshall Todd (Barbershop) and, for season two, Anthony King ("Broad City," "Search Party"). Maurice "Mo" Marable is in the director's chair and is responsible for having the show filmed in Atlanta for its second season (Atlanta Journal-Constitution). Season one was filmed in Vancouver. Unfortunately, San Francisco is unaffordable for most shows to film there. 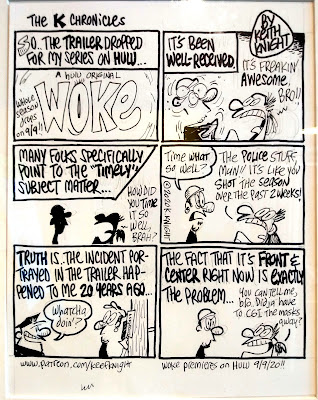 At the Cartoon Art Museum, we were generously treated to hearing Lamorne Morris, Sasheer Zamata (Ayana), Keith Knight, and Cartoon Art Museum's curator Andrew Farago talk about the show. Morris said that he could relate to Knight in many ways from the first read of the script. Knight told us an analogy of comparing working on the TV show as being like when I was in a band, “Except this is like an orchestra.”

Sasheer Zamata, who is regularly touring the comedy venues, and is a former SNL writer and performer, talked about Ayana being Keef's "Yoda." She helped him see that he can convey a message with his art to showcase a social commentary on life. Keef in season one was “keeping it light” as his character says in one of the moments in which Ayana confronts the fact that he has a voice, but he’s not using it.
Knight set up the second season explaining that Keef will experience how businesses are looking at ways to capitalize on the "woke" concept, commodifying the movement of Black Lives Matter. Plus the stories will involve learning more about the other characters of Gunther (Blake Anderson), Clovis (T. Murph) and Ayana (Sasheer Zamata).
Other stars include actor, comedian, and writer J.B. Smoove ("Curb Your Enthusiasm") who voices the animated character, The Marker. Following a traumatic event, the inanimate objects come to life to give him a reality check about the world.
The second season streams on Hulu. You can watch it in one weekend, however, you'll want to re-watch and look for the "easter eggs." I won't give away all of the bits, except I'll say that Keith is the street artist dressed as a mime in S2 E1.
Here are some screenshots that capture life in San Francisco as seen in "Woke."

Lastly, don't forget to check out the official playlist here.
Posted by Wednesday's Korner at 11:37:00 PM